What to choose for cross platform app development? React Native Vs Xamarin

Cross platform app development is the talk of the market today because native apps take much time if development increases the budget and the workload of testing and maintaining the application. Therefore, stakeholders are more relying on the option of lying at the brink for a long time. The cross-platform apps or hybrid apps are the amazing medium to maintain the buoyancy in the market while making the versatile moves.

There are many platforms and tools available in the market. However, whenever the talk of cross-app development arises, React Native and Xamarin are the first option in the market to go for.

Unfortunately, a few developers in the market are equally skilled in both technologies. This creates a dilemma for the business owners for which tools you must choose.

In the digital world, web application development has faded away and the mobile app market is on the boom. Every day thousands of the application are being uploaded to Google Play Store and Apple store. This also necessitates the development of a cross-platform app.

Why do we need to compare React Native Vs Xamarin?

We need to compare React Native Vs Xamarin because choosing one of them for your cross-platform app development makes a big difference in how your mobile application will be developed and deployed.

Your project may have specific requirements for which the only one of these frameworks might be suitable. Or perhaps your desired mobile app would need some specific functionalities that could only be delivered by either of the two.

React Native is the javascript-based framework developed by Facebook. The first part of the react native app development framework was developed in 2015.

React Native works over the React Javascript library. The framework uses the native components for the front end. It communicates with the javascript code using special bridges rather than traditional web views, which makes it a reactive application for iOS and Android.

React Native is currently one of the most popular frameworks and used by thousands of companies. The platform is especially preferred by startup developers, because of free usage and no requirement of additional expenses.

More than 15000 companies every day are accompanying with the development using Xamarin for the project development. Novarum and Story are the famous cross platform apps built with Xamarin.

Comparison between React Native Vs Xamarin

Gaining introductory knowledge is not enough for deciding which is best for you. Comparing the platforms is necessary. Here is the comparison in terms of capabilities and features.

By the time you finish reading this, you’d have a clear idea which reaches among these would be perfect for your cross-platform mobile app! The comparison below can give you a reasonable cause to choose one among both.

Earlier, React Native was considered the innovation platform for the implementation of the data binding process. The framework provides one-way-data binding.

This means it binds the model definition with the representations and it does not involve the separate supervisor. This helps in detecting if the user has customized the definition in view or not.

The perfect teamwork condition ensures the parallel working of two departments at the same time. Developers face this core difference while working with different platforms.

For the developers, looking for performance-oriented capabilities, React Native is preferred, whereas for the flexible approach Xamarin is always recommended.

React Native provides developers with the number of built-in components. The components are available in the package manager. The developers can focus their effort on building the application architecture and for making the templates for specific functions. You can also employ the readymade features and tools for mobile app development.

Talking about Xamarin, apart from the standard set of classes in .Net, Xamarin developers also access the native iOS and Android platforms. This is made possible using Xamarin iOS and Xamarin Android, which lets you develop the software/apps identical to the native apps.

Here the compilation works differently. The Just in Time compilations are not available for iOS apps here as well, but Xamarin offers the replacement for the same. “Ahead of Time” compilation is available which works even faster.

The platform requires the knowledge of Javascript because the code is written using javascript. Also, the React JS library is used for components. React Native app development framework is React for mobile apps.

However, you can develop the components of cross platform software using third party solution and can use other languages and libraries. React Native is a very much appreciated language to work with. Developers emphasize the learning curve required to React Native.

The powerful tool Xamarin does not necessitate the knowledge of programming languages such as Java and Kotlin for Android or Swift and Objective C for iOS mobile app development. Xamarin offers the Xamarin package, which eliminates the need for additional tools.

The developers can get appropriate access to the capabilities of the Software Development Kit platform using Xamarin Android and Xamarin iOS libraries. Thus, all the knowledge developers need is the working knowledge of native classes from both platforms and C# and .Net development skills.

The app is tested using the testing app called Jest. The testing tool features good documentation and is accessible for developers.

The react native documentation is made accessible and it is coherently composed. You can take guidance from the documentation to try to react to native functionality without any need to install any software.

Whenever the developers face any problem while building the app with React Native, they can easily find an answer online. The platform is relatively young but has enough backup and support for the long run.

Xamarin is working in the market for almost a decade. It has more robust support and impressive backup. If the developer faces any issue while development, Xamarin online community is enough large to support.

This can help developers in resolving the issues through personal technical support. This support is available in the business license associated with the software.

React Native is a free pricing policy, whereas Xamarin offers both free and paid versions, where paid support is available for corporate. 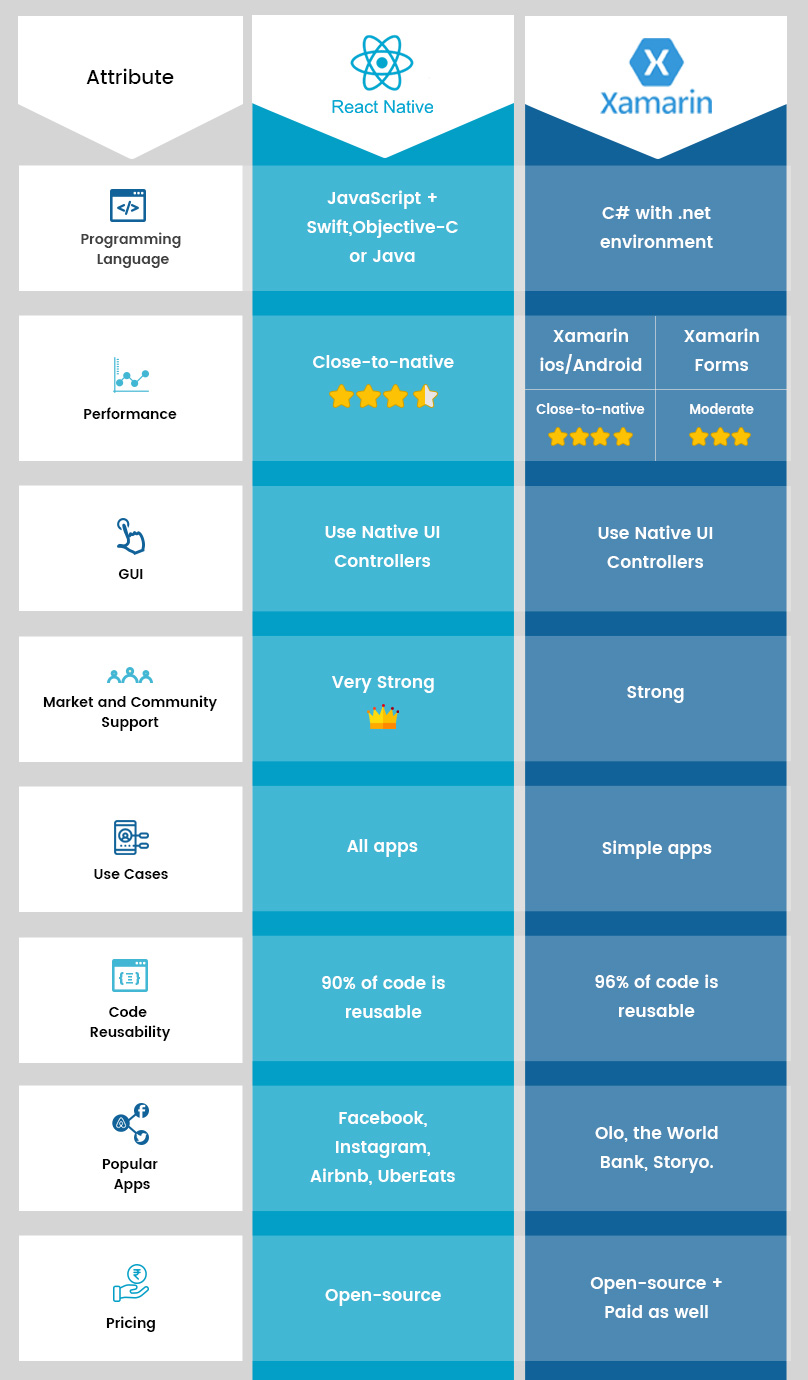 That’s it for the comparison. This comparison between React native vs Xamarin makes it clear that which one is a much better framework for cross-platform application development.

React Native Vs Xamarin: Which one to choose?

Xamarin allows the fragment of backend code for business logic repeatedly for mobile application development if the backend is implemented with .C#.Net.

In terms of the performance, and the speed of rendering along with overall high performance, React Native is the best bet for the cross platform apps. This is the reason why few developers often deny the use of Xamarin for interactive software development.

Apart from this, in terms of pricing policies, both Xamarin and React Native are entirely free for development.

For choosing the platform of your choice, it is always necessary to pay attention to the details and check if your targets are compatible with the framework’s features. Also, the experience of the developer must be carefully considered along with the preferences.

If your developers own the skill in C#.Net and have fewer skills in Javascript, React Native is less considered suitable whereas Xamarin is the most suitable choice for you. If the developers have a less working knowledge of C#, React Native must be your choice.

The above criteria are the most preferable one for a comparison between two platforms while hire mobile app developer. The choice of the most appropriate platform strictly depends on your project needs.

React Native and Xamarin both are capable platforms with their own set of enticing features. Both platforms are capable of delivering powerful cross platform applications and continuing to be better every day. The choice of platforms depends on the skills of developers.