Have you thought about that what makes cross-platform app development fantastic? These are the tools being used to develop these apps. So, if you are passionate to know about it or want to have a cross-platform app for your enterprise, In that case, this article will take you through some exciting details about the top-10 tools for developing cross-platform mobile applications.

Having an app for an enterprise or an organization is fantastic for the business. But the thing matter is the technology & tools used to develop the apps. There are several tools available in the market that developers use as per their choice, but some are the best and fit for every need. Around you, there are several applications that you use for professional as well as for personal use. That covers native and cross-platform apps.

What Is Cross-Platform App Development? 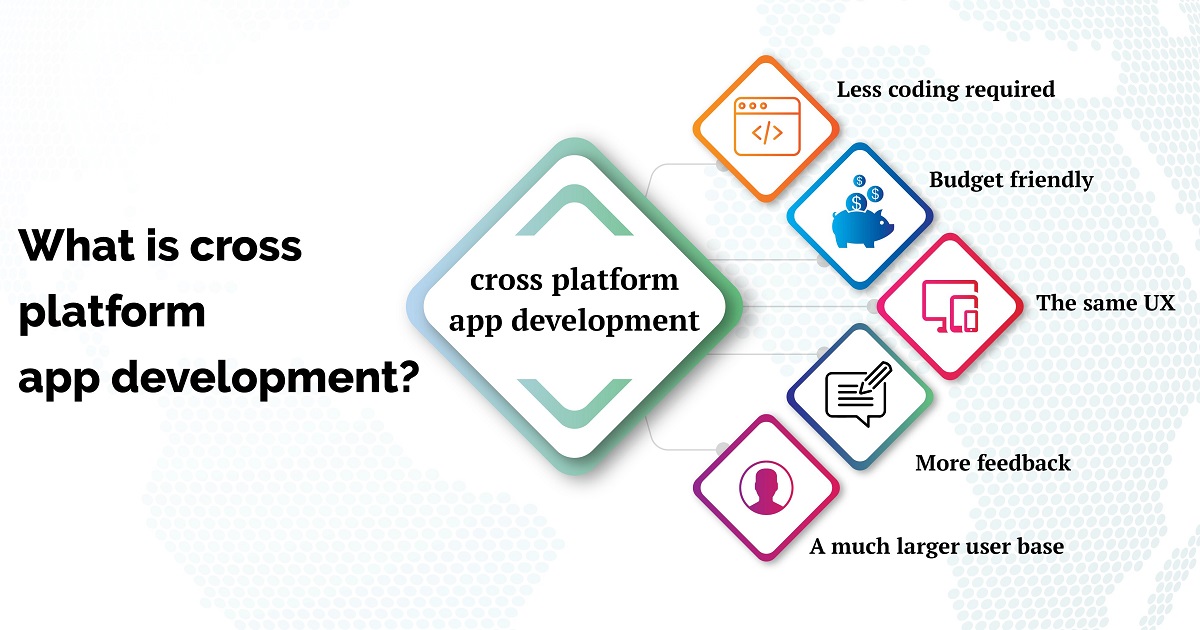 The process of developing an app that can run on various operating systems instead of developing multiple versions of an app for different platforms is called cross-platform app development. The sole purpose of producing these apps is to cover a wide customer base.

The major mobile platforms are Android and iOS, so the businesses are targeting users of both platforms with the help of cross-platform apps. These remain compatible with all mobile operating systems. Businesses utilize it for launching the app in a faster way.

Another thing that makes cross-platform mobile app development services best is much fruitful for the start-ups as they can target Android and iOS users with one app and within less cost instead of spending budget for both platforms separately.

Before we proceed with the further points here, you need to also know about the difference between Native and Cross-platform apps.

The Native Vs. Cross-Platform

In terms of performance and use, both are best, and the things depend upon the requirements. For example, suppose you want to target only one platform user, then a native app is best, but if you want to connect with the users of iOS and Android, then none other than the cross-platform app is best. There are several debates you can find across the internet about native and cross-platform development where some people claim one platform and some people claim another platform. However, if we look closely, then both are best at their place.

Cross-platform apps have a major advantage over native apps in, a single app functions seamlessly over all the platforms. Therefore, there is no need to develop multiple apps. The single code base is enough to develop the apps for diverse operating systems: Google’s Android, Apple’s iOS, Microsoft’s Windows, and many others. We can also say that it is start-up-friendly app development. Small business owners have to spend limited money and leverage the single application to attract users of multiple platforms.

The Benefits of Cross-Platform App Development

Is cross-platform app development is best for my business or not?

Cross-platform app development allows you to build an app and publish it on various platforms, including web platforms. It directly indicates that via an app, you can target wide audiences. It will also help you to promote your brand on a wider scale.

If you are a start-up owner, it is obvious that reduced development cost is beneficial for you. There will be no need to spend the money twice or multiple times for app development for the same app. Other than the development cost here, you will also save the testing, publishing, and other expenses.

One of the biggest advantages of cross-platform apps is code reusability. There is no need to write repetitive modules every time you can reuse the code with little modifications. The single code works fine across all the platforms.

Ensuring that the mobile app development process is on the right path allows for quick prototyping that makes the product effective.

As one app will function over various platforms, so deployment is easy, there is no need to put extra effort into it. The same thing is applied to the maintenance of an app. It saves cost and time also. In case of any discrepancy occurs, then fixing is so easy and handling issues so much easy.

There is no need to put effort into designing an app multiple times for various platforms. Here you will work on the single code base, and finely crafted UI/UX works the same on all platforms that save cost and effort. Once the designing part is done, except for some minor changes, there is no requirement to work on it. The same is applied to backend development.

Cross-platform apps take less time to launch on various platforms, so their market reach is fast. Suppose if we go with the native app development, then first we have to develop an app and then launch it on that particular platform, and then again we have to repeat the same process, and then the app will be launched again on another platform.

After launching an app, there is a time-to-time update required for various reasons like competition in the market or something else. For example, suppose you have launched native apps on Google Play Store and App Store. In that case, you have to do repetitive efforts to easily apply updates instead of repetitiveness with cross-platform Development in a single effort.

Worldwide each app developer uses their preferred tools for crafting cross-platform app. However, some top tools are being used significantly. This section of the article is dedicated to the top-10 tools for cross-programming. 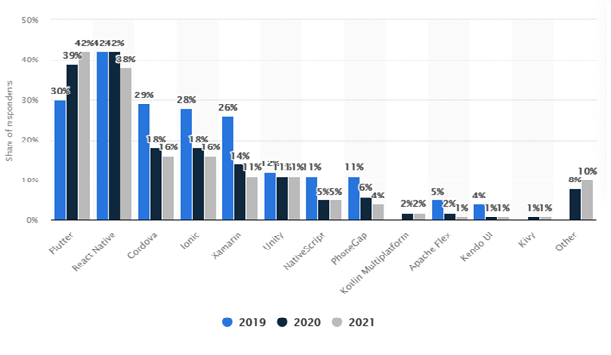 As per one of the reports published by Statista, Flutter cross-platform development is the top choice by developers in 2021, and the next choice is React Native Development.

When it comes to developing beautiful apps, then Flutter is the most promising framework or tool to do cross programming for developing enterprise mobile applications. It works like the first choice of any cross-platform mobile app development company. It is a Google-powered toolkit that is perfect for developing apps for mobile, web, desktop, and embedded devices using a single code base. Majorly its application for dynamic app development. Google Corp. launched this open-source UI SDK in May 2017. In a very short span, it is on every cross-platform app developer’s mind.

It is the second most favored tool for developing cross-platform apps. The React Native frameworks come with an enriched & best-in-class JavaScript library that allows building great interfaces. Using React Native programming, developers can create a decent app from scratch. Using languages such as C, Swift, and Java, a programmer can easily ride the modules. It can also be used for image editing and video processing.

The React Native converts source code in less time that makes it unarguably the best cross-platform app development. For beginners, it is very easy to learn, and if a person has practical experience in JavaScript, it will be very easy to use React Native Platform.

It is one of the best tools to develop cross-platform apps using .Net and C#. Xamarin is an open-source tool for cross-programming. With its help, an app developer can build a fine app for Android, iOS, tvOS, watchOS, macOS, and Windows applications with .Net programming, where access to native API is an advantage. It works fine for developing native as well as cross-platform apps. One of its best benefits is it can be integrated with modern backend services, native APIS, and components to provide rich experiences of an app.

The Ionic is an open-source mobile toolkit that facilitates high-grade cross-platform web and native apps. It facilitates the developer to leverage the power of JavaScript and web technology. Also, whenever there is a need to develop Hybrid apps, then programmers prefer the Ionic framework. It offers mobile-optimized UI components and tools. Most of the highly interactive apps you can find are built with Ionic. It is a powerful HTML5 SDK and utilizes the features of HTML, CSS, and JavaScript. The Ionic is well equipped with pre-designed components and interactive themes.

It is one of the finest open source cross-platform tools that enables mobile app developers to write the code hassle-free. The PhoneGap is a flexible tool that supports the developers to use multiple languages without having hardware restrictions. It is Adobe empowered tool and is best for cloud-based solutions. With it, you can use the programming languages such as HTML, CSS, Objective-C, C#, and many other programming languages. It works fine for integrating camera, geolocation, accelerometer, contacts list, and many other components.

Like React Native and Flutter, Apache Cordova is an open-source mobile development framework that allows developers to craft high-quality cross-platform applications that work perfectly on all operating systems. By deploying standard web technologies and plugins, the developers can swiftly build professional applications. In terms of cost and time effectiveness, it is such a great tool where programmers leverage features to develop multiple applications in real-time. It utilizes all the best features of HTML4, CSS, and JavaScript for application development so a developer can apply it to multiple platforms.

Either it is a mobile app, web app, or tvOS App- Corona is such a great tool that speeds up the development process. The developer can easily update the code, modify the modules, and instantly see the changes after implementing the code. Its lightweight scripting power helps to optimize the app performance. It is an open-source tool primarily used for developing 2D games as it offers high-quality graphics. Now its name is changed to Solar 2D, a Lua-based game engine that facilitates the programmers for easy iterations.

QT’s tagline says- One Framework, One Codebase, and any platform. It is used for creating fluid UIs, applications, and apps for embedded devices. Implementing the modifications is easy, as once the update is done, it reflects immediately in the app. It also supports in terms of performance monitoring of apps on diverse platforms. The QT framework is easy to use and less complex in comparison to the cross-platform app development tools. It has its cross-platform IDE and is equipped with several development tools that developers use to develop the front-end and back-end of a mobile application.

The Sencha offers 140+ high-performing UI components to build magnificent apps. It reduces the development complexity for crafting large apps for enterprises. Not only for development, has it helped in testing the applications as well. It allows developers to create interactive & reusable themes for Android and iOS platforms. Another best thing is that it also facilitates the developers to organize the uploaded app content for the best view. Its compatibility with cross-platform tools makes it one of the top choices of developers.

The Unity3D is an open-source web app development tool having the cross-programming ability. Having an excellent graphics capability helps in developing 3D games. Moreover, you can also use it as a mobile app. It is such a greatest combination of an app and a tool. The games built on Unity3D can export the game on multiple platforms such as iOS, Android, Windows, Xbox, PlayStation, Linux, Web, and Wii.

So, finally, it can be said that these top-10 cross-platform tools are wonderful to have a business app. The rest of the thing matters on the app development idea and strategy.