Angular vs. React: Which JS Framework does your Project Requires?

Along with the advancement of time, the number of technologies is also growing day by day. Nowadays IT firms have many framework options which can benefit your project in various ways. You just have to choose the best framework according to the requirements of your projects. That is why when the JavaScript Ecosystem provides the option to choose two of the best front-end development frameworks, Angular and React tops the list.

Sometimes the simplest feature can give you big struggles while developing software for your project. That is why choosing the right front-end framework like Angular and react is very important for you. So the only thing that can save you from this dilemma is analyzing all the specific requirements for your projects. And then only choosing the preferable framework.

This blog will give you a better overview of how these two frameworks solve various front-end issues. So that you can prefer the best and efficient front-end framework for your mobile app development company.

To know more about Angular and React JavaScript Framework and which one to choose, please continue to go through every aspect.

What is Angular front-end Framework?

Also, the framework provides a better collection of integrated libraries and advanced features. Such as routing, client-server communication, and much more. The tools in this framework are suitable for large-scale enterprise-level projects. Moreover, it is also a constant updating technology that is by it is handled by the Angular team from Google.

Do not rush into any decisions as the Angular Front-end Framework takes some serious coding knowledge. So, you have to hire AngularJS developers available in the market for high-performing, stable and efficient products.

What is React front-end Framework?

The React Front-end Framework is also an open-source JavaScript framework that is suited for developing various UI and UX components of web applications. The presence of various declarative traits and components-based contents helps the developers to create complex UI easily.

Although the framework works on separate programming syntax which is called JSX. But if a developer can get a better grasp on it than TypeScript. The Framework works a ‘Learn Once and Write Anywhere’ principle. Which helps the developers to create scalable web applications faster than any other type of JavaScript Framework? Famous Web applications like Facebook are created with this framework along with various other individual developer communities in the market. The size of this front-end framework is 43K and it is the second heaviest among the other JavaScript Frameworks.

Hiring React developer services can increase the efficiency of your development process, which is why it is famous like nothing else. 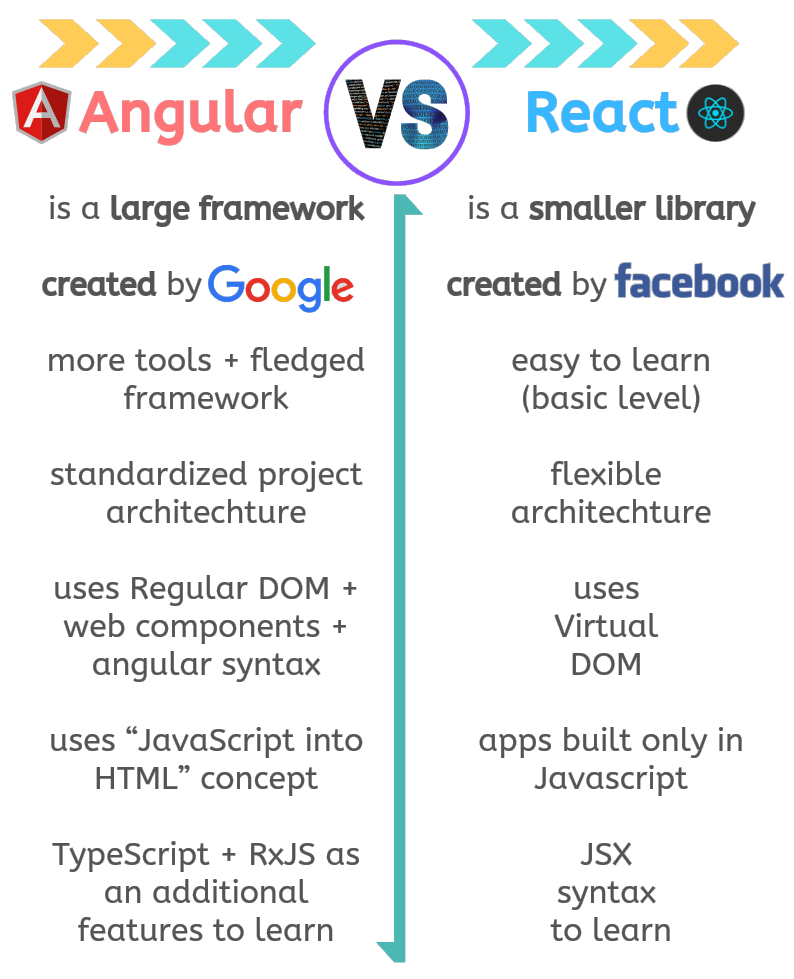 Which JavaScript framework is best for your development project?

The Angular framework is basically created on the basis of 3 layers which are highly complicated and fixed. These 3 layers are control, view, and model. That is why AngularJS Development Company can break any application into small files as it is created with Angular JavaScript. This process helps in the repeated use of various templates on various parts of the application.

Whereas the React framework has a different type of architecture. It basically helps the developers to create an element tree. The library of this framework works on a declarative component basis where their definition is not found. Moreover, the code of React Framework is very easy to understand logically and also they don’t have to write all the codes individually.

In the case of React JavaScript developers, the documentation process is faster than Angular. This framework also receives regular updates but the previous insights also play a significant role in the documentation.

The Angular JavaScript framework provides a better development experience for the Angular JS development service. This is because the CLI tools present in the software help the developers to build and design various elements of the web applications easily. Moreover, all the commands and services regarding fixing various detailed issues. And the removal of Typescript can be done with one-line codes.

But in the case of React JavaScript development, productivity is usually affected by the presence of third-party libraries. Also, in this framework, the toolkit changes from project to project. So, the developers need time to familiarize themselves with the tools they are working with. This causes a delay in productivity as well as in the building speed of the web application.

Usually, most developers choose the Angular JS framework due to the presence of various ready-made solutions. Plus, it also offers them the space of constant upgrading and technology growth.

But it is seen that React JS framework is the most searched framework in recent years. The Stack Overflow developers in 2020 state that it is the most loved and wanted development process.

So both of the front-end JavaScript frameworks are popular in the market for their unique development process and building capabilities for React native app development company.

As the Angular JavaScript framework uses tools like Protractor, Jasmine, and Karma. The entire project can be subjected to debugging and testing. But that is not possible in the case of React JS framework. This is because developers have to use various testing tools and procedures for testing the whole project.

So, in terms of testing, time, and effort the Angular gains a better edge over React JS development.

In the case of the Angular Front-end framework, the developers have to create object model documentation. For every slight alteration in any segment of the entire data structure tree.

While using the Angular JS framework the developer has to use templates in the form of Angular Syntax’s. These syntaxes are very complex and sophisticated in nature and are difficult to understand for most of the developers available in the market.

On the other hand, the React JS framework provides to website development companies to implement logic and templates after the completion of every element in the development process. That is why the users can learn the codes easily and copy that syntax for implementation without understanding it.

The CLI feature present in the Angular Front-end framework contains a command called ng_update. This command helps the website development services to update the web application to the latest version of the Angular framework. In this way, the developers can avail better automated and hassle-free procedures for their web application.

In similar ways, the React Front-end framework also provides a smooth transition between 2 versions of the software. But in this case, the upgradation or transitioning is done between the third-party elements. This is because the development procedure is highly dependent on external libraries.

Before subjecting the web application for smooth upgrading the developers have to make sure the new library is compatible with it.

In the Angular Front-end framework, the developers can continue their software development works without any kind of libraries. As the all functions are executed with the help of various Angular packages.

On the other hand, in React JS framework the developers are needed to incorporate extra libraries. These libraries are responsible for optimizing the procedures by enhancing handling, communication, and routing with various APIs. Some of the libraries like Helmet React Router and Redux are worth mentioning.

The Angular framework comes with its own pre-loaded material design. So, the developers don’t have to design the User Interface components separately. This makes the UI development process faster and efficient.

Whereas the React framework allows its own community to customize various User Interface components. And upload those designs in their dedicated React portal. Plus, the developers are also allowed to browse various free or paid UI development tools.

Similarly, the React Front-end development also allows the developers to use all the above-mentioned software. But is not capable of executing server-side rendering. So it uses the Create React Application, powered by the Next JavaScript framework. Otherwise, the framework offers various tools to the developers for testing the web applications.

Both of the JavaScript frameworks offer iconic development solutions when it comes to mobile app solutions. The Angular framework provides the developers with an attractive UI component library along with a container called Cordova. This seems like a web inside a web app container while running the application on a mobile device.

But the React JavaScript framework provides a different native UI experience to the web development company. As the framework makes the developers bind UI elements with the native code. These codes can be written in programming languages like Kotlin, Java, and object-C.

Flexibility and independence are crucial factors for any development framework. The Angular framework provides their developers with a limited number of independence and flexible possibilities.

But on the other hand, the React framework provides their developer’s independence in various architectural, tools, and library aspects. This helps them to create a customized application that contains various tech stacks and tools for React development process.

The data binding process of the Angular framework works on a two-way binding basis. That means the model state will change automatically if any alteration is done in the UI component in the data tress, and vice-versa.

So, although the data binding facility of the Angular seems to be more effective and simpler. The one-way binding basis of React is more effective for scalable projects of various IT companies.

Regarding application functions, the Angular JS framework offers advanced elements like ShadowAPI. This makes the competition between the two JS framework fiercer in the market.

The React JS framework allows the developers to use software like Fibre and Virtual DOM for accessing various app functionalities.

Both the JavaScript framework follows a component-based architecture. So, in the term of architecture like modular, cohesive and reusable elements they both are similar. But they differ in the term of tech stack used during the development process.

There are some of the aspects depending on which you can choose the best JavaScript development procedure for your project. So, for that, you have to specify your priority according to which you can make the decision. Hire dedicated developers who can also help you to make this decision.

Both Angular and React are demanded open-source JavaScript framework which based on component development. Both of the frameworks have their unique way to solve various development issues. And also provide various types of development tools and perks. So, the best and efficient framework depends on the requirements of your project.

What is Node.js? Where, When, Why & How To Use It (With Examples)